Q just seems to know a little too much about X, Y and Z years before X, Y and Z actually happen.

We may as well talk about this because we're all thinking it: Q just seems to have the ability to know things before they happen. But is that possible!?!

If so, it should give us all an extra layer of calm and faith that "all will be well."

As I researched this article, it was natural for the line between simply viewing the future vs traveling into the future to become blurred. However, one detail about Time Travel became crystal clear: If someone goes all fame whore claiming to have time traveled, yeah, they probably have not.

Just today I heard a 1970s story about a gentleman who, like my Great-Grandfather Harold, was hit by lightning. My great-grandfather was horribly burned and then developed the cancer which eventually killed him. But the lucky gentleman in our story simply vanished.

After his family had frantically searched for him for sixty hours, he suddenly reappeared under a bush in his own garden, suffering from amnesia and wearing a different pair of trousers than the pair he was wearing when he disappeared.

Slowly his memory returned and he was able to retrace his steps during those missing sixty hours, only to discover that the doctor who treated him for shock and the trousers he was given to wear at the hospital were both from the 1950s.

That massive jolt of electricity had thrown him back twenty years in time.

Now that's what I'm talking about.

In another story, a man was toodling down a country road when a 1950s car with a lady in 1950s garb suddenly materialized out of thin air. She looked extremely confused as she stared at him before vanishing as quickly as she'd appeared.

I believe it's called a time shift. Time and space suffer a glitch. If it can happen organically in real life without outside interference just imagine what can happen if... 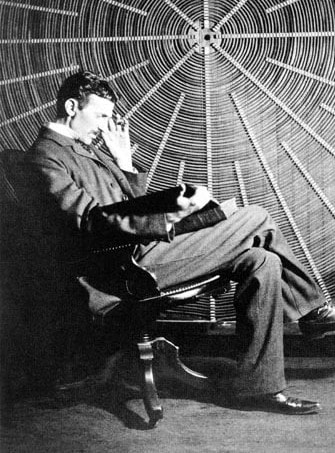 Michael always tells me if the government/military is allowing you see some advanced technology, they've had it for at least forty years already.

Which brings us to Tesla. All roads lead to Tesla, right? No, not the exploding car, Tesla! The brilliant Serbian inventor, Nikola Tesla, whose picture hangs in a place of honor on the wall in our home. He's one of the few people my brilliant husband, Michael, actually looks up to.

You've heard the quote, "If you have it, a trucker brought it." Right?

Well, if you have a particular technology, Tesla probably invented it.

For example, history tells us that Marconi invented the radio, right? Pfffffttt. Tesla "gave short-range demonstrations of radio communication two years before Guglielmo Marconi" but didn't get the credit. What Tesla lacked (such as Edison's ability to schmooze, raise money and steal inventions), he more than made up for in sheer, ahead-of-his-time brilliance.

Tesla invented the first AC motor and if he'd had his way, you would all be getting your electrical energy for free through the air.

Tesla described how cell phone technology and television worked in 1926.

And he supposedly developed the "Death Ray" (particle beam weapon; directed energy weapon [DEW]) which our government obviously uses to explode enemy tanks in Iraq or selectively set fire to California, whichever serves their purpose at the moment.

In 1943 when Nikola Tesla passed away, the Office of Alien Property swooped in and stole everything...Tesla's notes, letters, diagrams, schematics, everything that should legally have gone to his nephew, Sava Kosanovic, the US government filched.

But they didn't have the knowledge to know what they had. The FBI needed someone techy-techy to go through all of Tesla's papers and report back to them supposedly to keep any weapon designs from falling into the wrong hands. After all, this was 1943 and World War II was in full swing.

And this is where things get really interesting. 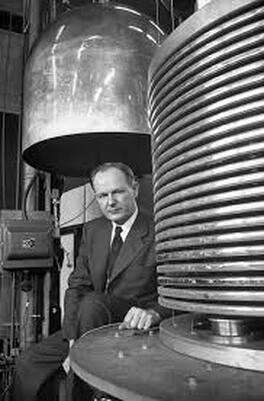 That's right, President Donald John Trump's uncle was the first (and perhaps only) person to see all of Tesla's papers before they were classified and disappeared and he talked openly to his nephew about what he'd seen.

Do you have goosebumps yet? I do and we're just getting started!

Past, Present and Future

"The experiments of Tesla in high voltage electricity along with magnetic fields," writes Sean Adl-Tabatabai for NewsPunch, "led to him discovering that time and space may be deformed to essentially create a door that may lead to another time."

Tesla told a reporter, "he was in contact with the resonance from the electromagnetic charge he had found that he went out of his space and time window. He said that he had been able to see the past, the present and the future at the very same time..."

Then in 1943 the Philadelphia Experiment occurred, thoroughly debunked of course, which launched sailors not only through space but also time.

Then there was the Montauk Project (1971-1983) which included Time Travel.

There is reference to a 1960s Navy "technology that could be used to view a visual scene from any historical period" and again it reappears in 1989 when Area 51 Whistleblower Bob Lazar mentions "Project Looking Glass." (Sadly, they allegedly used homeless children in their experiments, sending them "through the portals of time" which may also partially explain how half a million children go missing in the United States each year.)

And here we find ourselves back at Q. Post #3585 reads, "Project Looking Glass? Going Forward in Order to Look Back." 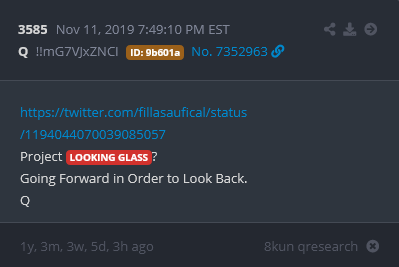 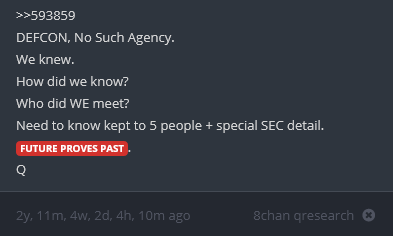 So basically, if Veritas Legio Facebook post is correct, the Black Hats had this future viewing/time travel technology and now the White Hats have it as well.

That puts a new complexion on the battle between Good and Evil currently raging. It's not merely a battle in the here and now, but one informed by the future.

Of course he does!

It's safe to assume he knew it about from his Uncle John long before he became President and received his security clearance and briefings. 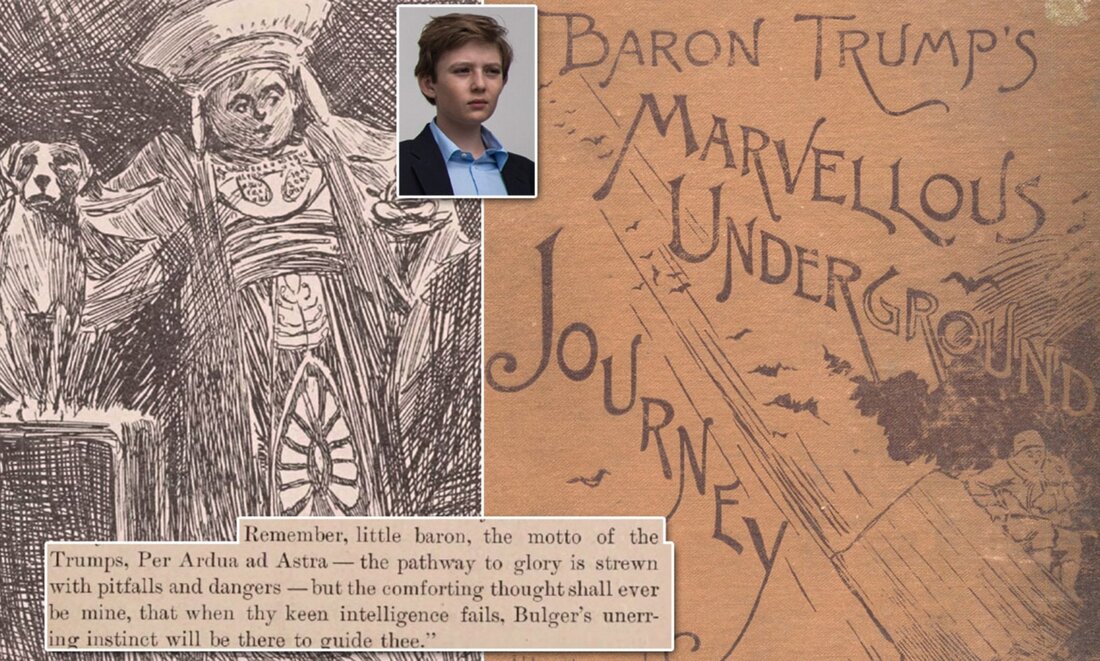 New York lawyer and author, Ingersoll Lockwood (1841-1918) would probably have continued to rest in peace if patriots hadn't re-discovered his books when Donald Trump became President.

In 1889 he wrote Baron Trump's Marvelous Underground Journey relating the exploration of "Wilhelm Heinrich Sebastian von Troomp, commonly called ‘Little Baron Trump'," guided by a document written by "Don" with illustrations that look shockingly like the President's son, Barron William Trump. The boy and the illustration have the same distinctive Trump pout.

Then in 1896, Ingersoll Lockwod wrote 1900 or the Last President detailing how "a political outsider overcomes stiff opposition to be elected President of the United States." He then appoints a Lafe Pence as Secretary of Agriculture while a mob attacks the hotel on Fifth Avenue, silver increases in value only to become worthless and, ultimately, someone blows up the Capitol Dome. (God forbid!!)

Somebody posted on 8kun that Tesla and Lockwood lived within walking distance of each other, but I've no way to verify that.

And if all that doesn't completely creep you out, here's something that ties the concept of Time to the name "Trump." I present to you the Ingersoll Trump pocketwatch. 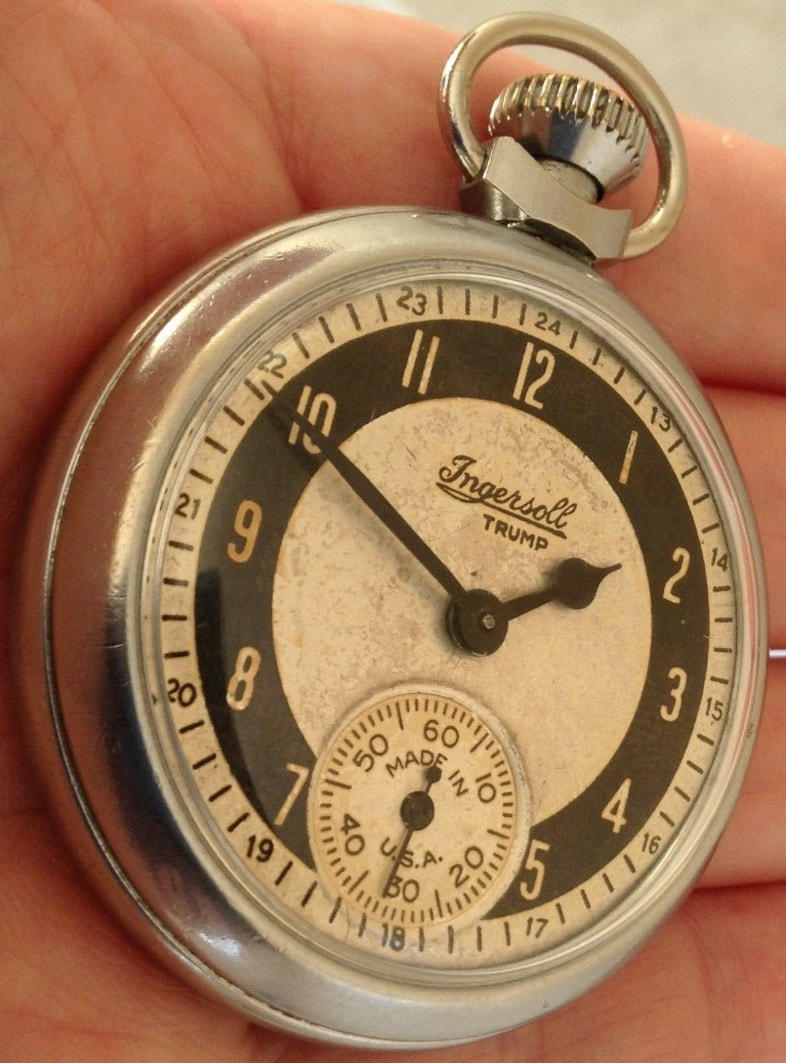 And One More Thing...

Now we're in the realm of 100% proofless conjecture but when I saw these photos, well! My jaw hit the floor.

All I know is that Julian Assange (The Founder of Wiki Leaks) looks nothing like his mother, a little like his father...but he is the spitting image of Dr. John Trump. 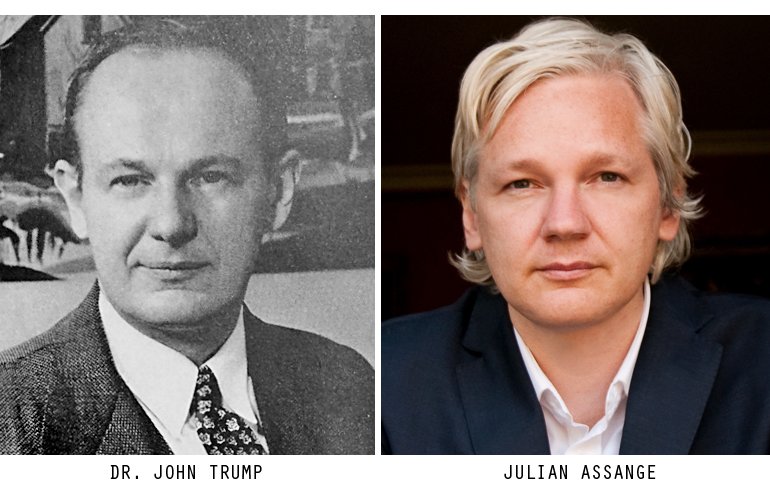 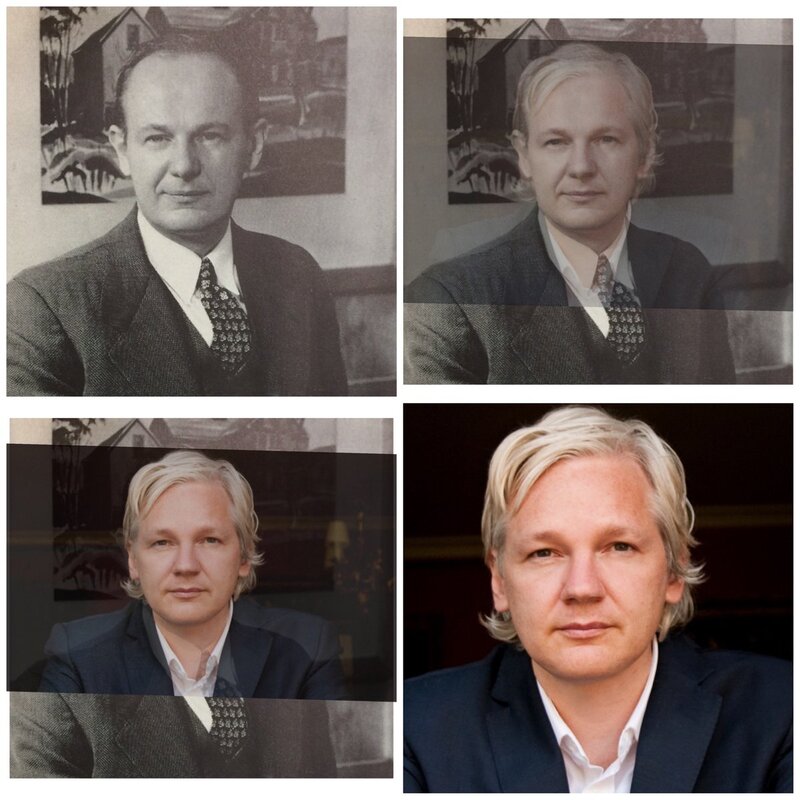 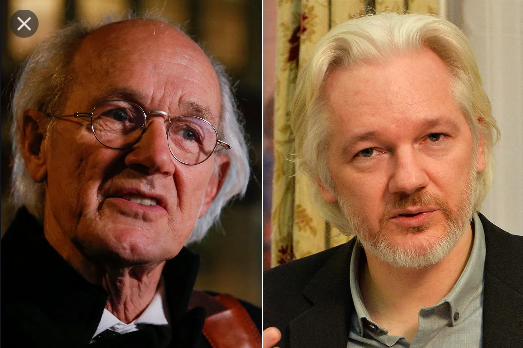 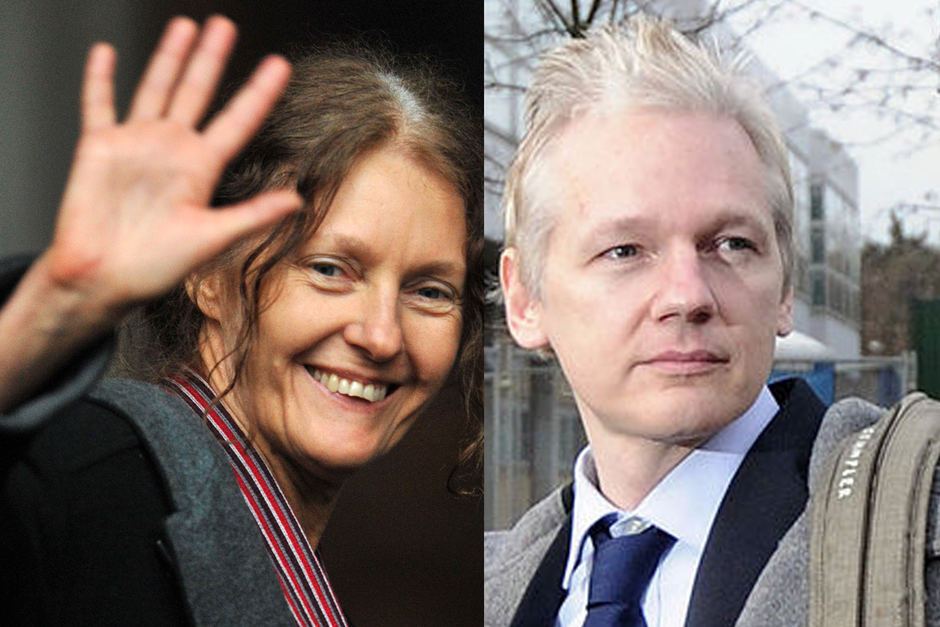 Well that was fun, wasn't it!? We went full on Conspiracy Theory, dove down the rabbit hole headfirst and lived to tell the tale. If you won't tell, I won't tell!

What it all means is hard to say but nothing is as it seems. As always, Shakespeare sums it up best, "There are more things in heaven and earth, Horatio, than are dreamt of in your philosophy.”