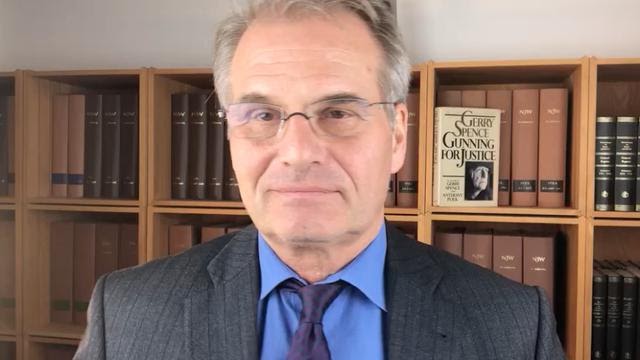 Dr. Fuellmich of discusses the findings of the (International Corona Investigative Committee) that was formed on July 10, 2020 by four lawyers. The committee is made up of lawyers, doctors, and scientists who together have reached the conclusion that COVID may well be the greatest crime against Humanity in history.

Their mission was to determine ~

How dangerous is the virus, really?
What is the significance of a positive test?
What collateral damage has been caused by the corona measures in regards to the world’s health and economy?

Since July 10, 2020, the German Corona Investigative Committee has taken testimony from a large number of international scientists and experts.

Their conclusions are the following:

The corona crisis must be renamed the “Corona Scandal”

Those responsible must be:
-Criminally prosecuted for crimes against humanity
-Sued for civil damages

Deaths:
-There is no excess mortality in any country
-Corona virus mortality equals seasonal flu
-94% of deaths in Bergamo were caused by transferring sick patients to nursing homes where they infected old people with weak immune systems
-Doctors and hospitals worldwide were paid to declare deceased victims of Covid-19

Health:
-Hospitals remain empty and some face bankruptcy
-Populations have T-cell immunity from previous influenza waves
-Herd immunity needs only 15-25% population infection and is already achieved
-Only when a person has symptoms can an infection be contagious

Tests:
-Many scientists call this a PCR-test pandemic, not a corona pandemic
-Very healthy and non-infectious people may test positive
-Likelihood of false-positives is 89-94% or near certainty
-Prof. Drosten developed his PCR test from an old SARS virus without ever having seen the real Wuhan virus from China
-The PCR test is not based on scientific facts with respect to infections
-PCR tests are useless for the detection of infections
-A positive PCR test does not mean an infection is present or that an intact virus has been found
-Amplification of samples over 35 cycles is unreliable but WHO recommended 45 cycles

Illegality:
-The German government locked down, imposed social-distancing/ mask-wearing on the basis of a single opinion
-The lockdown was imposed when the virus was already retreating
-The lockdowns were based on non-existent infections
-Former president of the German federal constitutional court doubted the constitutionality of the corona measures
-Former UK supreme court judge Lord Sumption concluded there was no factual basis for panic and no legal basis for corona measures
-German RKI (CDC equivalent) recommended no autopsies be performed
-Corona measures have no sufficient factual or legal basis, are unconstitutional and must be repealed immediately
-No serious scientist gives any validity to the infamous Neil Ferguson’s false computer models warning of millions of deaths
-Mainstream media completely failed to report the true facts of the so-called pandemic
-Democracy is in danger of being replaced by fascist totalitarian models
-Drosten (of PCR test), Tedros of WHO, and others have committed crimes against humanity as defined in the International Criminal Code
-Politicians can avoid going down with the charlatans and criminals by starting the long overdue public scientific discussion

Conspiracy:
-Politicians and mainstream media deliberately drove populations to panic
-Children were calculatedly made to feel responsible “for the painful tortured death of their parents and grandparents if they do not follow Corona rules”
-The hopeless PCR test is used to create fear and not to diagnose
-There can be no talk of a second wave

Injury and damage:
-Evidence of gigantic health and economic damage to populations
-Anti-corona measures have:
-Killed innumerable people
-Destroyed countless companies and individuals worldwide
-Children are being taken away from their parents
-Children are traumatized en masse
-Bankruptcies are expected in small- and medium-sized businesses

Redress:
-A class action lawsuit must be filed in the USA or Canada, with all affected parties worldwide having the opportunity to join
-Companies and self-employed people must be compensated for damages

Re: Starting Litigation for Crimes against Humanity Dr Reiner Fuellmich

They have been prparing that case since july.
And I'm quite nervous if DS have used that time to bribe, blackmail, treaten etc. the judges.
It's such an imortant case - and it's kind of urgent now
Top
Post Reply
2 posts • Page 1 of 1