If President Trump has had these documents that are clearly declassified by him for almost 2 years, why is the FBI in the DOJ conducting a raid at his house now?

I will tell you why,

1. They were using the [classified nuclear document excuse] to have a reason to go there and look for dirt Trump has on THEM the (DEEP STATE).

2. The deep state is running out of ammunition. They are at the end of their rope, and they are getting desperate. Everything they have tried to do against President Trump has failed, and he has countered them at every turn. I mean think about the Russia Russia Russia hoax, impeachment number one impeachment number two, the whole January 6th thing, literally everything they have tried to do to bring him down has failed.

4. They see President Trump going to Rally's all across the country where thousands and thousands of people attend every single time.

5. They see all the candidates that President Trump has endorsed winning in primaries in landslides all over this country.

7. They are starting to realize that every time they do something to attack President Trump, it only makes him stronger, and his support grows because of it.

9. They know they have nothing regarding the whole January 6th event and the unselect committee is empty-handed, and they realize that they are not going to be able to use January 6th against Trump, so they have to come up with another plan what I like to call a last ditch effort to try to dig up some sort of dirt on President Trump to use against him before the midterms.

There is a reason why the judge will not unseal the probable cause document, which will reveal the reason and purpose for issuing the search warrant of Mar-A-Lago. There were some documents that President Trump had possession of, these documents were officially declassified but for whatever reason they did not have the Declassified stamp, which does not mean that the documents have not been declassified. I do believe that is what they are using as "just cause" stating that some of the documents do not have the declassified stamp on them even though they have been officially declassified and that is one of many reasons why the judge will not unseal the probable cause document. I also beleive that they were using the classified document excuse to have a reason to go there and look for dirt Trump has on THEM the (DEEP STATE).

At the end of the day when you look back over the last two plus years it's very easy to see the difference between a free, and energy independent nation that was growing, prospering, thriving under the leadership of President Trump and a nation that is literally being driven straight into the ground right before our eyes by the corrupt, evil communist regime that is pretending to be running our nation right now.

Kash Patel: "The American people have only seen 60% of what President Trump has declassified."

The other 40% is what is worrying someone. And it's all been declassified prior to Trump leaving the Office of The President.

President Trump's office told Just the News on Friday that the classified materials the FBI seized from his Mar-a-Lago estate were declassified under a "standing order" while he was President that allowed him to take sensitive materials to the White House residence at night to keep working.

The official statement is likely to become the focus of President Trump's legal defense as the FBI and Biden Justice Department investigate whether he stole records covered under the Presidential Records Act or mishandled classified materials under the Espionage Act, allegations included in a search warrant released by a federal court in Florida on Friday.

President Trump has maintained for weeks that any documents still containing classified markings in his possession after he left office were previously declassified. On Friday night, the statement issued to Just the News explained exactly how that declassification occurred in his mind.

The very fact that these documents were present at Mar-a-Lago means they couldn’t have been classified," the former president's office stated. "As we can all relate to, everyone ends up having to bring home their work from time to time. American presidents are no different. President Trump, in order to prepare for work the next day, often took documents including classified documents from the Oval Office to the residence.

"He had a standing order that documents removed from the Oval Office and taken into the residence were deemed to be declassified," the statement added. "The power to classify and declassify documents rests solely with the President of the United States. The idea that some paper-pushing bureaucrat, with classification authority delegated BY THE PRESIDENT, needs to approve of declassification is absurd."

Two former senior aides who worked for Trump in the latter half of his term said they were aware that Trump routinely took documents to the residence rather than return them to the Staff Secretary or the intelligence official who provided them. Asked whether there was a standing order, one former official "I don't know anyone or anything that disputes that."

Ordinarily, documents declassified by a president are later retrieved and marked declassified, usually by crossing a line through the prior classification markings. But former top aides to prior presidents acknowledged the president's power to declassify was absolute and at times resulted in instant declassification decisions.

One prior administration official related an instance where his boss, while talking to a foreign leader, gave top-secret information to the leader, declassifying simply by sharing what he had seen in a top-secret marked document. Another official related an instance he witnessed in which a president, during a meeting, received a top secret document and one official got up to leave because his clearance was only at the secret level.

"The president instantly approved that staffer to stay and consume the top-secret intelligence because it benefited the president's work at that moment," the person told Just the News.

The president's detractors in Congress, the DOJ, and the intelligence community are likely to contest the president's arguments. But officials familiar with national security law said courts generally have held the president's power to declassify is far-reaching and that the process for how that happens can be more happenstance, something the Bush and Obama executive orders from 2003 and 2009 made clear.

Obama's executive order no. 13526, issued in 2009, laid out the stringent process all federal officials and agencies needed to follow for declassification, but explicitly exempted the sitting president and vice president from having to follow those procedures.

Officials said it is likely the FBI will seek to find any officials or witnesses who knew or can confirm there was a "standing order" as described by the Trump statement. But in the end, officials said the president's declassification powers were sweeping and likely would be viewed as such by the courts.

FBI Was Looking For Docs That Expose Their Own Crimes… 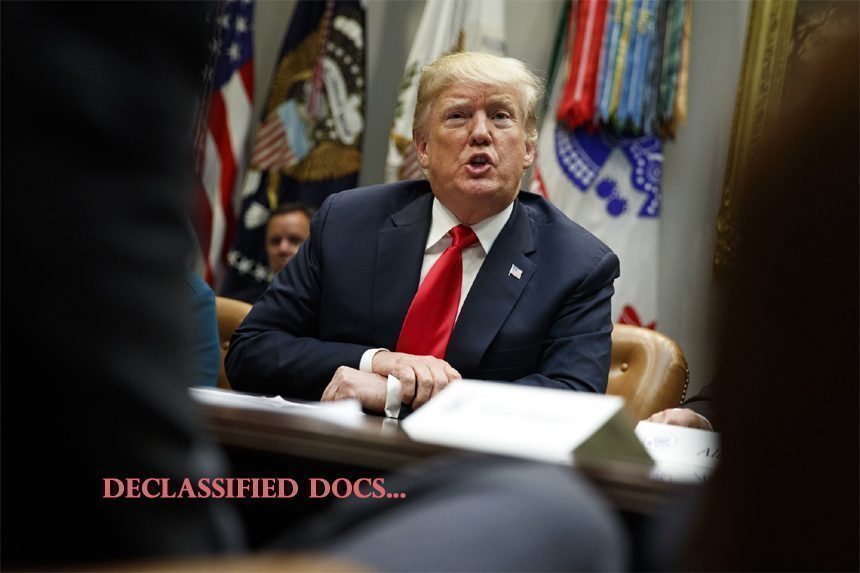 President Trump declassified the docs in an order in 2020:

“At my request, on December 30, 2020, the Department of Justice provided the White House with a binder of materials related to the Federal Bureau of Investigation’s Crossfire Hurricane investigation. Portions of the documents in the binder have remained classified and have not been released to the Congress or the public. I requested the documents so that a declassification review could be performed and so I could determine to what extent materials in the binder should be released in unclassified form.”


Trump wrote in the order.

“I hereby declassify the remaining materials in the binder. This is my final determination under the declassification review and I have directed the Attorney General to implement the redactions proposed in the FBI’s January 17 submission and return to the White House an appropriately redacted copy.”

Trump Wanted the American People to See the Truth About Docs – Then the FBI Came for Them: Former WH Official

Kash Patel, a former Federal Prosecutor and Department of Defense official under former President Donald Trump, has revealed a key flaw in the Biden Department of Justice’s claims following the FBI raid on Trump’s estate at Mar-a-Lago.

Patel explained that reports of classified materials found at the Palm Beach property are misleading because the documents were already declassified.

“Our democratic principles require that the American people be informed of the activities of their Government. Also, our Nation's progress depends on the free flow of information, both within the Government and to the American people. Nevertheless, throughout our history, the national defense has required that certain information be maintained in confidence in order to protect our citizens, our democratic institutions, our homeland security, and our interactions with foreign nations. Protecting information critical to our Nation's security and demonstrating our commitment to open Government through accurate and accountable application of classification standards and routine, secure, and effective declassification are equally important priorities.”


More guidance on this was later sent via memorandum to all heads of executive departments and agencies.


DECLASSIFICATIONS PROGRAMS AT THE DEPARTMENT OF JUSTICE

The Automatic Declassification Program pertains to agencies with original classification authority (past and current). Information appraised as having permanent historical value is automatically declassified once it reaches 25 years of age unless an agency head has determined that it falls within a narrow exemption that permits continued classification, and it has been appropriately approved.

Records that contain other agencies classified information is referred to those agencies for action. Though the Department of Justice may declassify their interest in a document, it will not be fully declassified until other agency equities are cleared.

The Mandatory Declassification Review Program permits individuals or agencies to require an agency to review specific classified national security information for purposes of seeking its declassification. This program allows historians, researchers, and other members of the public to identify documents and or information pertinent to their research.


ACCESSING DECLASSIFIED MATERIALS AT THE DEPARTMENT OF JUSTICE

Information that has been declassified under the Freedom of Information Act (FOIA) is often posted in FOIA Reading Rooms online. You may access the Reading Rooms, https://www.justice.gov/oip/04_2.html

How to File a Mandatory Declassification Review Request:

To view Declassified Records at the National Archive, visit the link below:

Users browsing this forum: No registered users and 1 guest