The legal effort will be supported by the America First Policy Institute, a nonprofit formed earlier this year by alumni of the Trump administration.

“Today, in conjunction with the American First Policy Institute, I’m filing as the lead class representative, a major class action lawsuit against the big tech giants including Facebook, Google and Twitter as well as their CEOs, Mark Zuckerberg, Sundar Pichai and Jack Dorsey. Three real nice guys,” Trump said with a note of sarcasm from Bedminster, New Jersey.

The legal filings indicate that the suit against Google targets its subsidiary YouTube.

“We’re asking the US District Court for the Southern District of Florida to order an immediate halt to stop social media companies’ illegal and shameful censorship of the American people. That’s exactly what they’re doing. 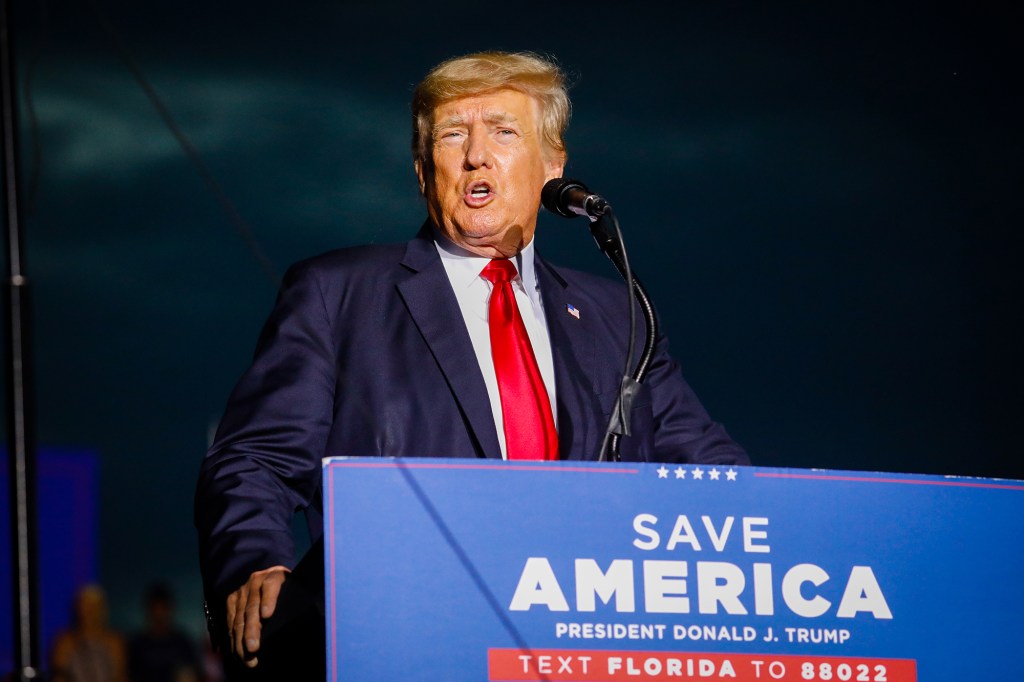 Trump added that he’s asking the court to impose punitive damages against the companies.

Trump added that the team is looking to reform Section 230, which legally protects social media companies from content their users post and how they moderate their platforms.

Trump added that the legal team is “not looking to settle.”

On Jan. 8, two days after the riot at the US Capitol, Twitter took the unprecedented step of permanently banning then-President Trump’s world-famous account from the platform.

Facebook also kicked Trump off its social media platforms around the same time, saying the ban would last at least through the end of his presidency. The company later sent the case to its Oversight Board to rule on whether the ban should be permanent.

In May, the Oversight Board upheld the company’s decision to block Trump, but said an indefinite ban was inappropriate and gave Facebook six months to lay out clearer penalties.

Facebook announced last month that the ban will last at least until 2023, when the decision will be reassessed.

After that announcement, Trump blasted Facebook for “censoring and silencing” his political movement.

“Facebook’s ruling is an insult to the record-setting 75M people, plus many others, who voted for us in the 2020 Rigged Presidential Election,” Trump said. “They shouldn’t be allowed to get away with this censoring and silencing, and ultimately, we will win. Our Country can’t take this abuse anymore!”

“Unless Congress acts, Big Tech is going to continue to censor Americans and trample on our foundational principles of free speech and open exchange of ideas in an effort to control what Americans say, hear, and think,” Sen. Bill Hagerty (R-Tenn.) said at the time. “Despite recently being exposed for wrongly banning and suppressing information regarding the origins of COVID-19, Facebook is now doubling down on its censorship playbook.”

Hagerty and Sen. Josh Hawley (R-Mo.) have both introduced legislation in Congress aimed at reeling in the power of big tech companies.

Members of both political parties in Congress historically supported reforms to laws governing Big Tech firms such as Amazon, Google, Facebook and Twitter. For example, both Biden and House Speaker Nancy Pelosi (D-Calif.) backed repeal of Section 230 of the Communications Decency Act, which grants immunity for most third-party online content.

Social media platforms have faced invigorated calls for their regulation since Facebook and Twitter censored The Post’s reporting in October on documents from a laptop formerly belonging to Hunter Biden that appeared to implicate his father in business dealings in China and Ukraine.

In October, Twitter demanded The Post delete six tweets that linked to stories that the company claimed — without any evidence — were based on hacked information.

The company claimed The Post violated a policy on sharing “hacked materials” by tweeting links to bombshell exclusives on Biden’s emails — without ever saying how it came to that conclusion and despite the fact that neither Hunter Biden or anyone else has claimed his emails were hacked.

News Corp called the move, “an important moment for journalism and for the freedom of the press.”

“There is no evidence whatsoever that the documents are not authentic, and the arbitrary blocking of the Post was a significant moment during a critical time in this election season. It also had a negative commercial impact, but the Post team was determined that principle should prevail and it has.